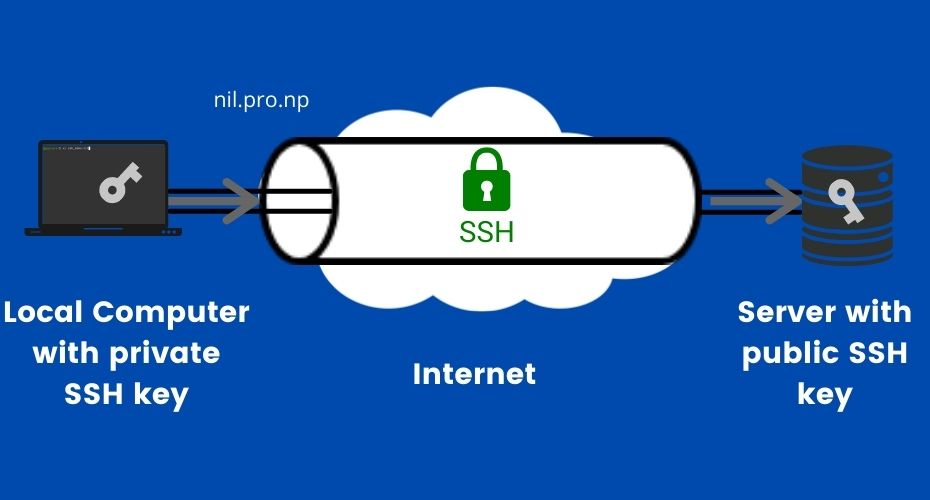 The SSH is a cryptographic network protocol for operating network services securely over an unsecured network. It stands for Secure Shell. Mainly used to remote login, secure file transfer (sFTP).

How to generate a new SSH key in Linux?

Here this email part is just a comment to label key, you can replace email with your email address or any text you like.
This generates a 4096-bit RSA key, we can use 2048 also.

Note: ED25519 is more robust and secure than the RSA key, so I recommend using ED25519. Also, it’s a good idea to protect your SSH key with a password so that hackers can’t access your server immediately even after they get access to your private key.

Enter the following command in the terminal to change the password, it will ask your old password before giving the option to set a new one.

Open Terminal and, enter the below command.

This list the all file inside the .ssh folder in the user home (default location).

How to connect to the server using SSH key?

Here your public key should be in the same directory with the name privatekey name and .pub at the end.

Note: if you have your ssh private/public key in the default location then you don’t need -i flag and path to the key.

Also, If your computer doesn’t have SSH (password-based) already enabled, you may need to add a firewall rule to allow SSH connection.

How to add our SSH key to ssh-agent (SSH authentication agent)?

ssh-agent is a key manager for SSH. ssh-agent holds our keys and certificates in memory, unencrypted and ready for use by ssh in the background.

So, we only need to enter passphrase once. Otherwise, we will need to retype the passphrase on each connection.

This ssh-agent and ssh-add command allow the user to use any number of servers, spread across any number of organizations, without having to type in a password every time when moving between servers.

This is commonly used by system administrators to move among the machine they administer.

This is a common error we face when we copy the SSH key from another computer and try to connect with the server. This is most of the due to the permission of the SSH key file.

I face this annoying problem when I change my system from Ubuntu to Pop!_OS. I spent almost a day troubleshooting this issue.

When you copy a file in the system, the file loses its permission and is wide open to everyone. SSH key being a sensitive door to system, Linux tries to protect the user from unauthorized use of SSH key.

To check it, manually add the SSH key to ssh-agent. It will show

“Permissions 0777 for ‘/ssh/id_ed25519’ are too open.
It is required that your private key files are NOT accessible by others.
This private key will be ignored.”

Solution: To solve this issue change the permission of the SSH key file so that only the key owner can read/write.

Actually, it turns out to be a security feature of SSH.

SSH agent forwarding is a mechanism whereby an SSH client allows an SSH server to use the local ssh-agent on the server, the user logs into as if it was local there.

For a scenario, when you are working on a remote server, and you want to git pull code that you’re storing on Github, Gitlab. And, you want to use SSH authentication for Github/Gitlab, but your private keys are on your local machine.

One method is copying private keys from the local machine to the server and connecting to GitHub. If we need to configure multiple machines then we need to repeat the whole process in each machine very tedious.

Also, it’s dangerous to store our personal private keys in the remote server, anyone who has access to our remote server [ if anyone/hacker grants access] can retrieve our private keys and can access our other host/machines as well.

To solve this problem, we use SSH agent forwarding in our local machine, then we can directly connect to GitHub from the server like we are doing from the local machine.

How does SSH Agent Forwarding work?

To explain, SSH agent forwarding process here I will take the same example of connecting to Github from a remote server.

When you try to pull code from Github in a remote server with SSH authentication, Github will ask the remote server for authentication verification. In normal cases, the SSH agent responds with key verification using the private key, but in the case of SSH forwarding, it will forward this request to the local computer [SSH client that originally contacted the server] then the SSH Agent of the local computer responds with verification message. When Github gets the message, it verifies the request and lets us pull the code.

We can establish SSH Agent Forwarding in two ways:

Add below code in ~/.ssh/config file in local machine.

Now, our SSH agent forwarding will work next time in a normal ssh connection.

Method 2: Passing A flag in the request. This method is useful if you only need to forward the SSH agent for one time.

Add -A flag when doing SSH to the server like below:

To test the connection from a remote server

If you have any confusion following this tutorial or any topics on this Nil blog, don’t hesitate to ask in the comment section. You can also reach me on Twitter.

previousHow to install and set up firewalld in CentOS?
nextWordPress development tool: Local by Flywheel’s Pro features are Free